I've been listening to some new music! W00t!

Discovered Coconut Records the other day and have been listening to songs from their albums Nighttiming and Davy.

Also, The Dead Weather released their album Horehound not too long ago. Oh... and guess what?! They're coming to Vancouver! August 21 and 22. They have a sweet music video for Treat me Like Your Mother.

Brilliant as always, Modest Mouse, are releasing a new album - No One's First, and You're Next. All the songs of which are up on their MySpace at the moment. I'm really enjoying Guilty Cocker Spaniels.

I've also been listening to Wilco and their album A Ghost is Born which is an album from 2005 actually, but I'm really liking some of the songs on it. Company in my Back is probably my favorite song on there.

The Fiery Furnaces also released a new album called I'm Going Away. It's not as crazy as other albums - more structured and flowing, and it's really good! I can't really explain it, but the album review on Pitchfork has it - "After a half decade of booby-trapping many of their most charming melodies, the Furnaces have come full circle with I'm Going Away, a set of clean, straightforward tunes..."
Posted by Vorgus at 11:14 AM No comments:

The Lovely Feathers and The Racoons

I went to The Railway Club in Vancouver the other night to see The Lovely Feathers. Opening for them was The Racoons and both bands were great!

I had already listened to The Lovely Feathers a bunch on their MySpace, but I didn't really know what to expect from The Racoons. Well they didn't disappoint. We had to leave early, during The Lovely Feathers, but did get to hear a bunch of their songs including Lowiza - one of the songs we hoped they'd play before we had to go catch the Skytrain. Check 'em both out!
Posted by Vorgus at 11:02 AM No comments:

How to Murder, Teenage Jack, and Taxi

New Triangle Dude Comics are "How to Murder", "Teenage Jack", and "Taxi".

I think I was subconsciously inspired by "Mystery Solving Teens" to make "Teenage Jack." By the way, "Hark, A Vagrant" is awesome. Especially if you like any sort of history. Now, I'm no history buff and really only know the bare basic minimum of history at best, but I still love this site. Look at it people! Kate Beaton, is truly great, and her drawings of old-timey, fancy clothes are hot.
Posted by Vorgus at 10:42 AM No comments:

Golden Sun DS. Yes Yes YES! When I saw this I almost exploded from excitement. This is the third installment in the series and I can't wait! Golden Sun and Golden Sun: The Lost Age were fabulously amazingly awesome so good so good games.

It's actually crazy for me to think about how long it's been. It's been 6 years since the last game came out. 6 years. I can still remember the games quite vividly and remember getting the first one for the GBA for Christmas years and years ago. The whole experience was amazing. Not to mention at the time it was the most graphically impressive game on the system.

This third game is going to have to live up to pretty high expectations I am sure. However, I don't think I'll be disappointed - Golden Sun is great and the the first two times they got it perfect with a perfect formula for RPG fun.

Look at it and feel your jaw drop. Omgosh I'm so excited! "Golden Sun DS Trailer". 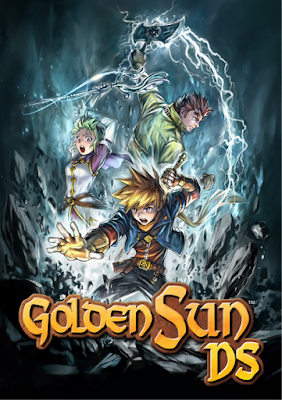 Whew. This thing is a beast - and a half... strapped to a manic lawnmower. Okay, so I've finally finished the second big phase in this piece - "Earthly Revenge," which I have renamed "Unnatural Vengeance."

This black and white inking process had to have taken about... hmmm... like 9 or so hours! Not to mention drawing it beforehand took about 3 or 4 hours... and now... I have to color it. Yes. Color. I don't have any idea how long it's going to take, but looking at it so far I know it's going to be so worth it. 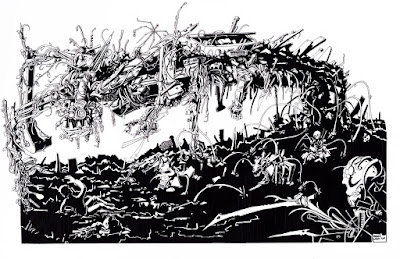 I managed to get out in the sun the other day. Holy smokes it's hot. So actually, I guess I managed to just get out into the shade!

Drawing Triangle Dudes in the shade is particularly relaxing and good fun! I managed to draft out a bunch of new comics that are well on their way. I'm especially excited about a pair of confused Pirates... you'll see!
Posted by Vorgus at 11:44 AM No comments:

Ah Warhammer. Me and my friend put our suits together and got some pictures taken... and holy smokes is there ever a lot of suits. 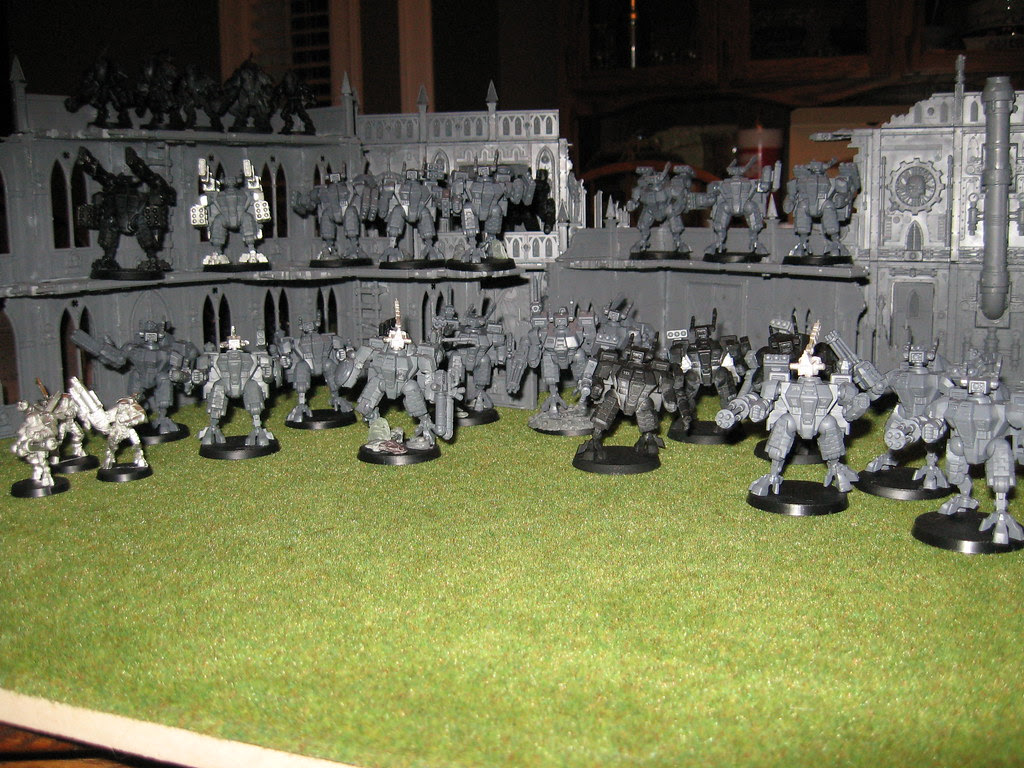 For a look at the other photos visit my Warhammer Photostream at Flickr.
Posted by Vorgus at 4:33 PM No comments:

"Earthly Revenge," and "Snakes Got a Leg"

Wooo! So I've been making a new big piece (big for me that is) of artwork. I've got the drawing portion of it done and I'm onto the inking phase now. This one will have color when it's finally done and in my mind it looks awesome. And... so far it's looking just as amazing on the paper. Below is the drawing portion of it. Like I said, the overall thing is still a work in process, but take a gander! 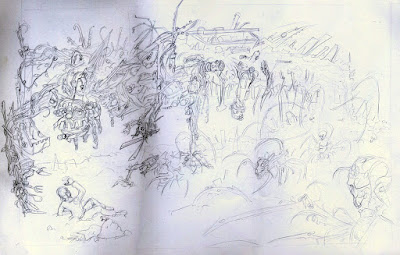 So basically, it's set in a sort of junk yard. Mother Nature has decided to use her plants and vines and what not and form all our garbage into her own vengeful creature. It's rising out of the twisted piles of junk and vines and is about to take revenge on the man adding the the trash pile. There's a few other creatures coming out of the ground too, ones got a horse skull, a dog skull, and two of 'em are human.

And now, I'll leave you with this quick little abomination I quickly threw together for fun. Inspired by the song "Snakes Got A Leg" by Sunset Rubdown. It would be funny, scary, alarming, and mildly hilarious to see a creature like this flopping along the ground after you. 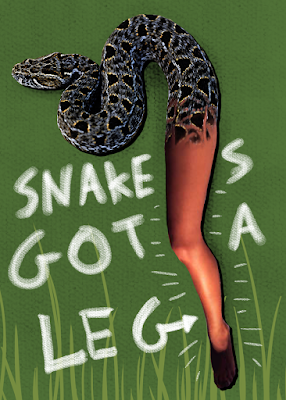 Posted by Vorgus at 4:18 PM No comments:

Well E3 went down not too long ago and with it came a whole bunch of new images and videos and games! I am thoroughly excited about a number of the games coming out.

There's a new Zelda game for the Wii. There isn't really anything much to show, I think there was one picture, but nothing besides the announcement that it's coming!

Also, a new Metroid game is on it's way for the Wii. I like metroid, but I can never seem to put in the time and effort to completely beat any of the games. Still, amazing stuff.

I'm drooling over Muramasa the Demon Blade for the Wii. You just don't see these kind of games anymore on Consoles. I really want this one!

The New Super Mario Bros. for the Wii also looks like it'll fill some of that 2D platforming hole in my video game shelf.

Another drool worthy game is The Last Guardian for the PS3. From what I can tell from the video this looks like it'll be a really interesting game and probably a lot of fun.

The preview for Alan Wake looks really quite stunning and has me really wanting to play it. It's coming out on the XBOX 360.

Scribblenauts for the DS won IGN's overall game award for the entire E3 expo! Isn't that amazing! I really want to try this game, basically everything you can think of is in the game.

This game is already out for the Wii and I can't wait to pick it up. Little King's Story puts you in charge of your own little kingdom and has similar elements to Pikmin in terms of controlling your villagers and workers and what not.

*UPDATE* Alright, I got a little excited. Little King's Story isn't released until July 21st!
Posted by Vorgus at 3:30 PM No comments:

What Dreams are Made Of, Ultimate Boomerang, Worms and Caterpillars, and Kids 2

Here's an update of the comics that recently went up on the Triangle Dude website. You can buy some dreams in "What Dreams are Made Of" or pick up the "Ultimate Boomerang." There's a comparison for the ugly and beautiful in "Worms and Caterpillars" and a bunch of noisy kids have returned for "Kids 2."
Posted by Vorgus at 3:24 PM No comments:

The newest Triangle Dudes are up for viewing pleasures and such. There's "Lights", "Dangerously Broken", "Fighting the Wind", "Fan Fail", and "Mr. Evil".

You might have noticed there are a couple of comics missing from June... you would be quite right. I took a little break from two deadlines - the Wednesday and Friday comic from one week are missing. It makes my heart sad to not have a completely full month of comics.

I can throw out a bunch of excuses like I was working a lot and blah blah blah... All you need to know is that everything is back on track and Triangle Dude is looking hotter than a pancake in a tanning salon.
Posted by Vorgus at 3:51 PM No comments: