I've been playing Clash Royale on my phone since it first came out in 2016. Now, I don't play it all the time every day, but if I've got a couple minutes to kill here or there I'll pop it open and play a match or two. It's a lot of fun. Many of the matches are very close with each person intensely playing cards to counter their opponent. Sometimes, you get smashed... Other times, you completely smash them. Like I said - it's a lot of fun. I'm level 10 at the moment! Here's a few of the decks I've been using lately.

This is my tried and true deck. It's gotten me just above 3800 trophies, and when I finally accumulate enough gold to upgrade a couple of the cards I expect to get even higher. There's nothing too fancy about it. There are no legendary cards, and most of the cards can be acquired early in the game. It sometimes has trouble with decks that use a lot of lightning, and I've had to develop some techniques for dealing with elite barbarians, sparky, bowler, and golem. 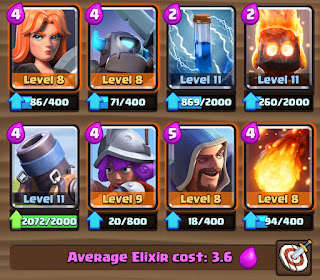 The mortar is integral to this deck and chips away at opponent's towers. Meanwhile, I defend it. Fire spirits are great for taking out minion horde and alright against elite barbarians when I also drop a valkyrie or mini pekka. The wizard and valkyrie take out hordes with ease, and the musketeer drops balloons and other flying pests out of the air. Mini pekka unloads a ton of damage if it makes it to the tower. Zap helps take out hordes, reset towers, enemies, and other cards with charge up attacks. Finally, the fireball is great for dealing a lot of damage in a decent sized area. Use it take out buildings and finish off towers - even better if there are some enemy units around to get hit at the same time.


This is my current golem deck. Ever since I got a golem I've wanted to make a deck utilizing it, and I think I've finally found one that works for me. It's gotten me into the 3300-3400 trophy range, but I'm hoping to get a little bit higher. Unlike my other deck, this one has more often steamrolled opponents. However, I feel like I'm at risk of being steamrolled by my opponent with this deck more often - and believe me it's happened. 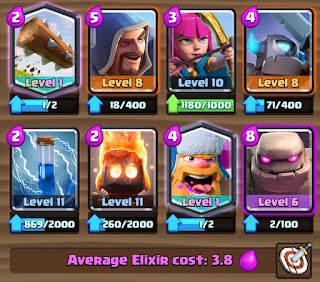 The golem is pretty self explanatory. Drop it at the back, or up front, and get ready to support it. It's usually a good idea to not drop it right away - find out what sort of cards your opponent has that might counter it. If those cards are out of rotation it might be a good time to drop the golem. Meanwhile, while waiting to drop the golem defend with the log, zap, and the wizard. If something heavy is coming drop the mini pekka or lumberjack. What we want to do is get the lumberjack and golem out at the same time. That makes for a terrifying golem. This deck has been pretty fun so far - I think I want to switch out the archers for the mega minion, but I need to level it up some more first.

If you haven't given the game a try - give it a try! It's free, and though it has in-app purchases I've made it as far as I have without spending any money. Have fun, and don't be a jerk with your emotes!
Posted by Vorgus at 6:01 PM No comments:

Superbia's Tank is off the Back Burner!

I mentioned Superbia's Tank over a year ago here. I've had it on my mind ever since and the rules have been an ongoing work in progress. Tweaks and massive revisions aside I think I've gotten it to a point where I just need to do some testing.

I've been working like a madman any chance I get to create line art for the game. At this point I've got everything drawn, but I haven't added any colour yet. This, hopefully, will come in time, but at this point it's high time I start testing the dang game! Here, take a gander at some of the artwork I've created for Superbia's Tank.

Player's order their tanks around the board, and a player's tank is made up of 3 distinct tank parts. The turret, the frame, and the treads. Tank part designs have been influenced from a variety of different objects. The telescopic cannon, the top right image, for instance is designed using aesthetics of a telescope.

Additionally, have a gander at how this artwork looks on the cards themselves. Again, colour hasn't been a priority because I want to start testing first.

I'm hoping it will be a fun, strategic game. Players will discretely play orders and then reveal them. You'll want to draw cards to find the legendary tank pieces, claiming 4 of which wins the game, but being shot at makes it harder to draw cards. There will be a small board for player's tanks to move around, and the closer to the center you are the more cards you can draw. I can't wait to print out a prototype and test it out!
Posted by Vorgus at 6:48 PM No comments: