I'm still working away on coloring Triangle Dudes. I made a quick video of me working away at it. It's probably kind of boring to watch, but it's all you get!

Oh wait, I've got something else here. I started drafting a "Where's Waldo"-esque picture. That's something to look at I suppose. It's pirate themed, because pirates are fun. Also, there will be natives, mermaids, and tourists all over the place.

Posted by Vorgus at 7:39 AM No comments:

I'm making progress on things and getting Dudes all colored up. Looks good. So good. Ultra good. I'm makin' it good.

Shouldn't take me more than a week or two to finish what I'm working on, then I'll be starting some "Where's Waldo"-esque pictures for "I spying." Loved those books when I was a kid. Don't know anyone who didn't. Anywhooooo, here's some progress for ya! BAM! 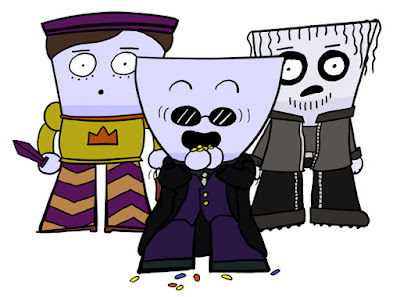 They are actually really super high res (not the picture on the blog but the original is) and just look like WOW in my face.
Posted by Vorgus at 7:15 PM No comments:

Ever since I read the little blurb about this game in my Nintendo Power magazine months ago I've been excited. My last issue had more of a preview and after looking at videos on youtube... I'M STOKED. I GOTTA TELL YOU GUYS ABOUT IT. Basically, it's the best rpg you'll play on the wii, and some have said the it's the best rpg of this generation over all consoles. I love rpg's, but the wii lacks 'em. I've had to settle with rpg's on my DS in past years and looked to the wii for other types of games. Technically yes, Zelda is an rpg, but that's an exception (and I'm still getting through skyward sword).

Xenoblade Chronicles by Monolith Soft is being localized for North America - I guess technically we're getting a European version but that makes it more awesome because of all the excellent British voice acting. The game takes place on the bodies of two huge giant god things. Ya, we're not on a sphere or a planet or Earth or any of that nonsense. You are standing on a dead god thing! It's actually really wicked to see a huge hand in the background of the world and know you could go stand on it.

The story apparently starts off really default, orphaned boy, destined hero, etc., but I've read it has lots of twists and the story is amazing. Graphics look great, remember it is the wii though so I'm talking "wii great." Environment is amazing, battle system looks fun, and it just looks like a blast. I'll totally be getting a copy when it hits the store shelves this April.

Posted by Vorgus at 9:21 PM No comments:

This thing is really starting to fill out. I can't wait to see what it looks like when it's all colored. It will be awesome! Just look at all those characters and random dudes with varying bits of wardrobe. I'm nearing the end of my list of dudes to draw and will hopefully start coloring them all soon. It's a bit of an undertaking, but seeing how it all comes together I know it's worth it. 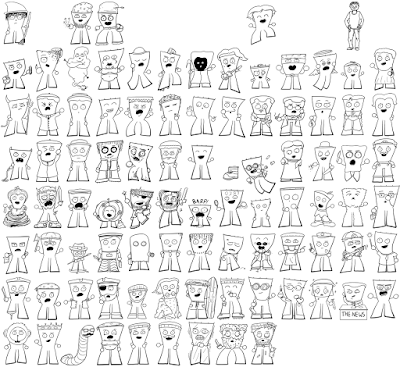 Posted by Vorgus at 8:55 PM No comments:

Triangle Dude Comics is Takin' a break. On the other hand, I'm not really taking a break because other projects are in the works. Most importantly, a Triangle Dude book is being put together. The plan is to have Triangle Dude's first 300 comics in the book - plus a number of extra tidbits (never-before-seen comics, character bios, where's waldo-esque pages, and more). Work has already begun, and though I have no estimated date for delivery, this blog will be a good place to hear all about it. Other Triangle Dude related and non-related projects are being worked on too - I'll be sure to fill everyone in here on Blog Vorgus.

Here's a little peak at some of the characters that will be in the book, and probably made into a poster or wallpaper at some point! 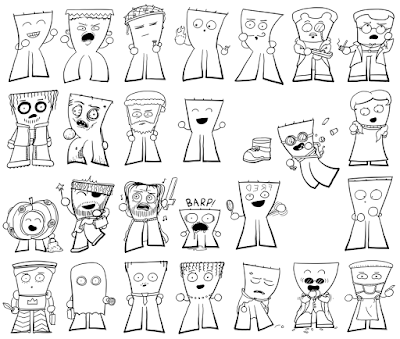 Posted by Vorgus at 6:59 PM No comments: