The Amiibopocalypse is Over... For Now

Well, Nintendo finally released the final Smash Bros amiibo and they are now sitting on our shelf. I was a little frustrated that Nintendo would release 2 versions of the final 3 amiibo because, well, because that's twice the price for completing the collection! However, Corrine P2 and Cloud P2 have been extremely difficult to get a hold of. As such, my cognitive dissonance allows me to be satisfied with having a "complete" collection without having a "complete" collection. We may never get those final alternate versions of 2 of the characters, but at least we have 1 of each character!

Now behold, the amiibo in all their glory! :) 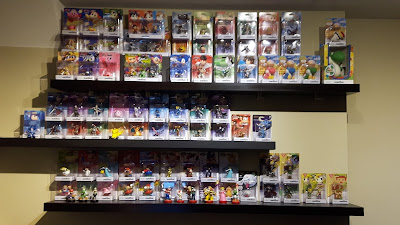 It looks awesome, and I'm proud to have actually played and trained up a number of them into Smash Bros monsters. The hunt for amiibos is over for now... though the amiibos of the 4 champions from Zelda: Breath of the Wild look awesome and dang it Nintendo I will have to get those too!
Posted by Vorgus at 9:50 PM No comments: