So it's been like a month and a bit and there's new stuff, but not too much new stuff to talk about. Mainly, I had a two week break where I worked half the time but still managed to get some stuff I wanted to do done.

I beat Mario Galaxy finally, then proceeded to beat the second one as well. There were a lot of new cool ideas in the second one, just as good if not better than the first one. Also, I finally beat Zack and Wiki - second last level is the hardest puzzle ever (thank you YouTube for your walkthroughs). Now I'm working on Final Fantasy Tactics, ya, a GBA game! I beat the story, but of course I gotta get that last special character.

I got a list and I'm goin' through 'it, I have video games clogged up in the waiting list, a couple have barely been touched. They shall be beaten before buying new ones! Oh, and Plants Vs. Zombies is great, I beat the story, then a Steam bug wiped my save file from the face of the internets... GREAT GAME THOUGH!

Finally, school's started and I'm gonna be doing some cool modeling stuff in class. Perhaps I shall post about it? Yes? We'll see how much time I got.

And finally finally is a new website I'm working on! It's basically a single "ME" page, providing links to everything I'm involved with as well as being a place for potential employees to check my portfolio and view my resume. Check it out below. The pictures cycle through a selection and that logo in the top left spins... just like real gears do! 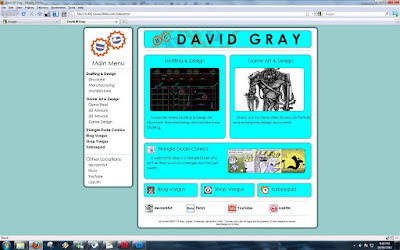 So the nice thing about redesigning this site is that I'll be using the basic style and architecture to make an updated Triangle Dude Comics website! New features will include having the most recent comic displayed on the front page, no more clicking extra buttons to see what you all want to see. And ya ya, I'll get on the new comics... not for a while though. School's eatin' time again.
Posted by Vorgus at 4:57 PM No comments: