The hiatus is over! Hooray! There is a brand new comic on the website today. Thank you again to Ahren Bader-Jarvis for the idea in this comic.

New comics have returned, but there is no set schedule as of now. I shall be adding new comics sporadically and irregularly. You might be able to expect about 1 comics per week, maybe more, maybe less. However, there will be no more waiting months for a comic.

Also, the Triangle Dude Book is nearly done and in it's final review process. Take a gander at the cover :D 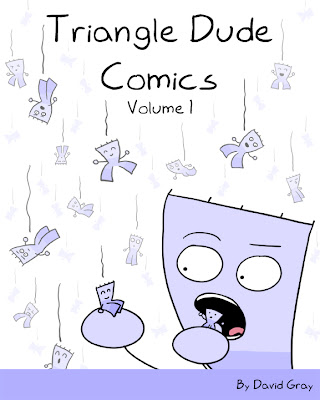 Posted by Vorgus at 1:19 PM No comments:

It's taking a little longer than expected, but I'm going as fast as I can!

The book is in it's final revision and is on it's way to amazon's "createspace" which will be handling the printing and shipping of the book. With any luck it should be ready shortly. Of course, no guarantees because my estimation for this kind of stuff is apparently terrible.

Since the book is now just being uploaded and setup online I have picked up my stylus and begun drawing comics again! The comics will resume a more random, probably once a week, non-scheduled schedule. Probably not what people want to hear, but at least there will be new comics!

Work on the second volume has already begun, but will only be touched here and there and will not be top priority at the moment.
Posted by Vorgus at 8:46 PM No comments: