The goal is to reach the fabled 400th comic. It's all part of getting the comics into print form. Volume 1 contains the first 100 comics and is already out. Volume 2, and Volume 3 are well into the works and for that matter so is Volume 4. However, with each volume having 100 comics each (plus cool exclusives) it means I have some more comics to make! Good news for everyone!

After comic 400 I have some idea of what I want to do, but we'll see. As it stands I'd like to start a large story arc tentatively titled "To Christmas." It's a story I wrote years ago and have a minuscule amount of sketches for, but it's something I really want to do. Hopefully it will be the high stakes, wacky, thrilling, triangle dudiest adventure yet! It will be a full length story arc too, none of these 3, 4, 5, or even 6 comic story arcs. Nope. Not that.

It will probably be a whole 100 comics all on its own!

... I can't get ahead of myself now though. I'm focusing on some new comics for the website right now and to finish Triangle Dude Volume 2, 3, and 4. :)
Posted by Vorgus at 11:40 PM No comments:

I recently finished wonderful 101 for the Nintendo Wii U - another in a long line of games I've owned for what seems like forever but am only just getting around to playing/beating. The ending is still pretty fresh in my mind, not only for how over the top it was, but also for getting out of my seat and laughing out loud for reals. For reals peoples. 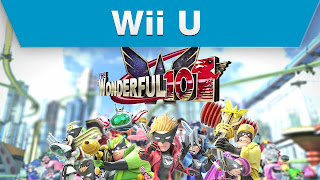 This game involves defending the earth with a group of 100 super heroes that, together, can morph into a variety of shapes. Each level plays in stages or missions and involve a number of fights against enemies. Most of the time when it's time to fight an enemy the game cordons off the immediate area and you must defeat them to continue. The levels each feature a variety of fights and the very end of each level is a boss fight. The boss fights are all very different and often quite different from the normal gameplay. It's a lot of fun!

Wonderful 101 knows how to fun with itself and definitely got more than few chuckles out of me. The characters are all unique and the dialogue is often sprinkled with little jokes. Because of this the story comes off a little light-hearted and casual, but it does have its serious moments.

The game itself is challenging... I played it on normal mode and even an experienced gamer like myself had difficulty with some of the levels and fights. I used 4 continues on a single level once! It was incredible! Though the game has some stiff opponents it's still a lot of fun to kick butt with your ever expanding array of unite morph attacks. Fists, whips, claws, swords, guns, hammers and more.

The game has a couple of downfalls. One of the most annoying is sometimes just trying to figure out where to go or what to do. The camera is sometimes so focused on your group of heroes that it's hard to know what your surroundings are... For instance, I've run right into a fire or off a ledge a number of times for simply not being able to see where I was going. I think a lot of the frustrations I had with this game stem from this issue, but I wouldn't let it hold me back from recommending the game to others.

The whole experience was a lot of fun and it makes me wish there were more games willing to take some risks and do something completely different. I've enjoyed my time playing wonderful 101, and I've had one of the best laugh out loud moments from a game ever thanks to it. I just wish more people knew about the game and had seen the ending so I could have someone to share it with! Awww well. As wonder green would say, c'est la vie!