There's a star in there too. Just try to ignore it, it has nothing important to say. 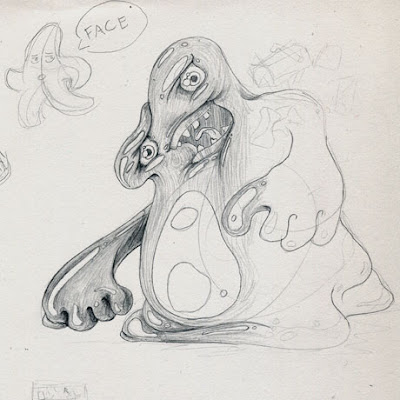 Posted by Vorgus at 5:17 PM No comments:

First of all, Triangle Dude and Dr. Wurm are all up on some mountain shaped like a gorilla fighting off some giant spiders or something, I don't know. But secondly! There is something that may or may not, but most certainly does, have something to do with a movie that's coming out. Having a Pet Dragon would kick so much butt. And not just human butt, but all those other animals butts too.

If you haven't seen the trailer yet, then click on this conveniently place link -> How to Train Your Dragon. It's gonna be hot.
Posted by Vorgus at 5:11 PM No comments:

So a new comic is called Swimming and another one is called Newspaper Bandit. More importantly though is this video you must check out titled Triangle Dude - Swimming - Speed Draw.

It is a video made by me! It includes a very speedily drawn comic, complete with outlining, coloring, shading, and background makingness. The video has a few artifacts as I quickly pan around which I'm not sure how to get rid of after speeding the video up - I am not quite an adobe premiere master, but I will try again... later... ish.

You can watch it in HI DEF too :P SEE TRIANGLE DUDE LIKE NEVER BEFORE! Wow...
Posted by Vorgus at 8:55 PM No comments:

Comics! More of em! 'Tis all I hear! Well bah! Bah I say. You shall have your comics and then some... :P but in no particular new schedule or system or whatever but just the same as always. So enjoy :D

There's a flashy new adventure featuring Triangle Dude and Dr. Wurm in... "Evil Robot Factory". Also, there's an educational comic on "How to Dance", but not too educational mind you - that could be hazardous. Like something... RADIOACTIVE! Or... VOLCANO-ACTIVE. Yes yes fire and burning and the melting of flesh perhaps.
Posted by Vorgus at 8:26 PM No comments:

Holy Smokes! It has come to my attention that there is a new cartoon coming to Cartoon Network... which I don't get on cable, but am still super excited for! Adventure Time embodies everything that is me, or so its trailer seems to suggest to me. It's like there's some other very creative people out there with minds similar to mine. I can't wait! SCIENCE DANCE!
Posted by Vorgus at 7:26 PM No comments:

The sun is back! (At least for now) and so is Triangle Dude! I'm in near tip top condition after slaying that cold with my sword of kleenex power!
Posted by Vorgus at 7:24 PM No comments:

I went to some concerts the past couple weeks. They were part of the free stuff going on because of the Olympics in Vancouver. Down at Holland Park in Surrey I got to see, Hot Hot Heat, Hey Ocean!, Said the Whale, Mother Mother, Hey Rosetta, You Say Party We Say Die, Tokyo Police Club, and Wintersleep. I even got to meet Tokyo Police Club so that was super neato!

So I wouldn't say I have tons of Concert experience, but as it slowly builds I believe I can be accurate enough to say something about them which I have described in this handy little graph! 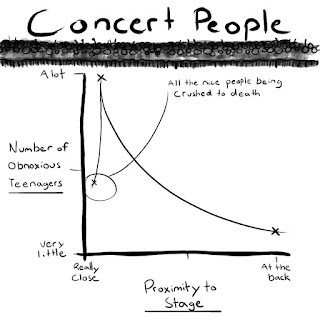 Also, if anyone fancies that graph they might also enjoy checking out Indexed where you'll find a whole ton of stuff like that! :D
Posted by Vorgus at 5:44 PM No comments:

Gorillaz new album is on the way! I'm excited yes I am. It's called Plastic Beach and you can totally go listen to it... RIGHT HERE! For free yes. Yes.

I love their music, and also their art style. When I saw art for Tank Girl I was instantly reminded of the Gorillaz, and vice versa... well, what I didn't know until reading the article in the above link is that the same Artist works on both things! DOH! That makes sense! It's Jamie Hewlett, very awesome. I recently picked up a Tank Girl book with a bunch of artwork in it and I can't wait to go drool all over it.
Posted by Vorgus at 7:24 PM No comments:

Just thought I'd chuck what music I've been listening to up hear, well the music I listened to during last year... IN GRAPH FORM! Koolio. This is my second time, and of course you can do it too if you've got a Last.fm account. Just go to Last Graph.

Click on the picture to hopefully see anything at all... It's too big for the internets I suppose.

There's loads of Animal Collective, of Montreal, all mixed in with a good helping of Modest Mouse, Digitalism, System of a Down, Radiohead, St. Vincent, with a sprinkling of Passion Pit, Neutral Milk Hotel, Passion Pit, Ugly Casanova, and Sunset Rubdown.

Something also cool is the fact that Sunset Rubdown helped inspire Johnny Depp for his role as the Mad Hatter in the movie "Alice in Wonderland" due out on March 5th.
Posted by Vorgus at 7:09 PM No comments:

Here's a couple Panoramic shots of a recent Apocalypse battle a couple o' friends had. Orcs Vs. Imperial Guard.

These are actually the first pictures I've properly stitched together since I started taking pictures of this stuff. Thank you Photoshop!

Well Check it out! 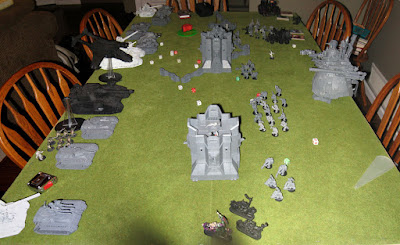 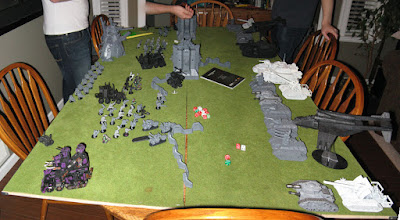 Posted by Vorgus at 7:05 PM No comments:

First of all, the newest comic is called "Magic", because magic is always the answer. Where did my pants go? The magic did it. Why is the oven hot? Magic. Why do orange flashes periodically burst forth from my eye sockets? You get the idea.

Also, there's a little change over at Triangle Dude Comics. What? Change? Yes, do not be frightened. The Bulletin board in the Menu which I ceased using like half a year ago has been replaced... by this! Yes, Blog Vorgus will now take the place of that awful Bulletin board because all the news I ever need to say is right here! And this is in no way a clever scheme to direct more traffic this-a-way... though that side effect is most welcome.

The Links page also kind of really probably should get an overhaul as well, so I'll get on that soon I suppose... Look for that to change as well!

Now... I am starting to get sick or something which sucks big time, especially since school just got back in. So it may take me an extra day or two or something to get around to making comics (look! News already!) so just hold your horses. :P
Posted by Vorgus at 5:25 PM No comments: