This year saw me bring in a pair of my headphones to work which I could plug into the computer. The music helps keep me focused and makes the day go by a little faster. It's wonderful! Now, I don't really subscribe to any particular music service like google play, spotify, etc. so the I've been getting tunes in my head is by listening to music on YouTube.

I have the autoplay feature turned on for YouTube so I can just start playing a song and when it's done it'll go to the next music video and I can listen to it in the background. This has taken me on some random music adventures. Some are hits and some are misses, but I'm sure glad I've had a chance to learn about some new music this way!

Here's some of my favourite songs and music videos!

First off, my sister sent me this cool music video that also has some sweet beats. It put a big smile on my face! This song, "SOURCE," by Fever The Ghost also led me to some other great music.


One song and music video I was led to is "Let's Go" by Stuck in the Sound. The art style is clean and the story is kind of tragic, but in a way that should make you think a little bit.


Another great song and awesomely animated music video is "Delta" by C2C. I had to watch it a couple of times before I noticed and realized that the triangle symbol on the neglected religious man's clothing also happens to be the thing people are all fussing over in the video.


Yet another band found via autoplay is Concorde. They're a french indie band, but they do sing in English. It's hard to find much of anything about them, but they have a bunch of songs on YouTube you can listen to. Honestly, they're all worth listening to. All gold.


I can't say enough about Lorn. The beats are always spot on and completely pull me in. Makes me feel like it's the future - the feeling of some mysterious, unseen, ambiguous force of the future. The music video for "Anvil" basically visualizes one possible future - one in which over population has probably occurred.


Another Lorn music video, for "Ghosst(s)" is just a total creep you out sort of video, but oh so cool.


One more from Lorn, but there are so many more to explore, is "Acid Rain." It's a solid tune that I just have to share.


I could listen to this song over and over again. "Bye Bye Macadam" by Rone sounds great on it's own with a nice buildup, but I could also watch the music video over and over again. There's something hypnotizing about it. I like to think the dancing figures are beings exerting their influence over the universe and it's creation and flow of energy.


One heck of a catchy tune - Mr Oizo's "Hand in the Fire" has me bouncing my head up and down and singing along to the, uh, racy, euphemistic lyrics.


A racy music video this time around as we've got Tame Impala's "The Less I Know The Better." The innuendo is pretty blatant, but the transitions and cinematography is top-notch. Plus the song is great!


Another song found by jumping around via autoplay is "You Don't Know Me" by Son Lux. I'm hooked.


"Change is Everything," also by Son Lux, is another great song. The Music Video blows my mind every time I watch.


"The Cigarette Duet" by Princess Chelsea is totally hipster, but oh so fun and cute.


I stumbled onto Mac Demarco and his album Salad Days. It's joy to just chill, work on something, and just listen to. Here's "Treat Her Better."


"Dazzle" by Oh Wonder is a song that gets me moving. I just want to groove to it.


Vitalic, an eletronic band I love to listen to, had a couple more new albums I didn't even know about! The autoplay stumbled me towards them one day and I was overjoyed to hear more. "Lucky Star" was a Vitalic reawakening for me.


"Stamina," also by Vitalic, gets me pumped up. Ladies and gentleman, CRANK IT UP!


It has a bit of a mind-bending music video to go along with it's catchy track. Uffie's "Difficult" is fun.


Gesaffalstein's "Pursuit" music video seems to tell the story of the upbringing of some militaristic dictator and mad leader told via snapshots of his life. It's a great tune. (WARNING NSFW)


Metronomy has a new album this year. Summer '08 is an incredible album and every song is dripping with their distinct style. Here's one of my favourites - "Night Owl."


Sylvan Esso has many songs that are a joy to listen to. Here's just one of their excellent songs, "Hey Miami."


Neon Indian was a favourite from years ago. They've got new music! YEAH! Here's one of their awesome tunes, "Slumlord Rising."

Well, this has been one of my largest music posts that's for sure. I've enjoyed hearing so much new music this year - the above examples are only scratching the surface. If you're looking for new music give YouTube's autoplay a try and just see where it takes you. Start with a song you like, and just let it ride. Hopefully you've enjoyed what I've shared with you, and I can't wait to hear more new stuff in 2017!
Posted by Vorgus at 11:58 AM No comments:

Merry Christmas everyone! I hope everyone had a great day and a very merry Christmas. I know I'll be eating some delicious home cooked food later and spending time with family and friends. Two things I thoroughly enjoy (oh man that food is going to be yummy in my tummy). Also, we actually got some snow this year which is very exciting! There hasn't been snow in December in years, so many frozen-falling-iceless years... So it's nice to have some snow for a change! Anyhow, here's a special Triangle Dude Christmas card. Merry Christmas! 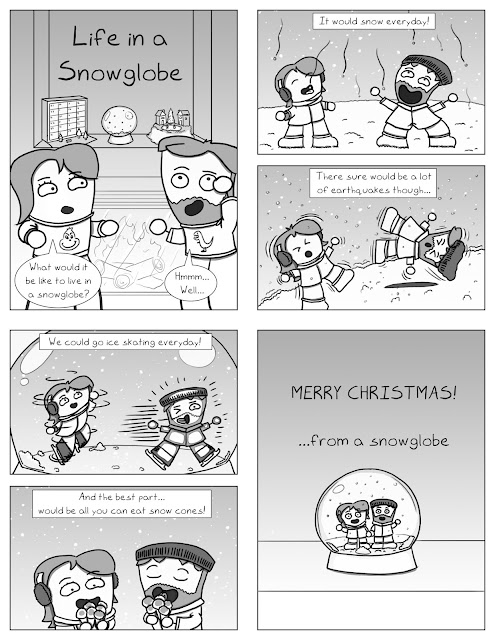