This is a little overdue, but me and my girlfriend celebrated our first Halloween in our new house! It was exciting and fun and hectic, but also a letdown on the trick or treaters front!

We bought our first Halloween decorations together which included an inflatable pumpkin, and my parents found us an inflatable vampire minion! It was a hit with a lot of the kids (I could hear them outside... Not creepy at all!).

Pumpkins were carved - right down to the last minute! A bit of mad scramble to get them done, but totally worth it. We carved a Minion, Rainbow Dash, Boo, and Patrick pumpkin! 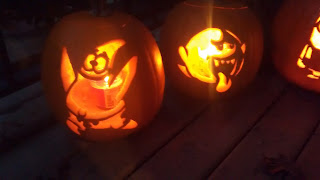 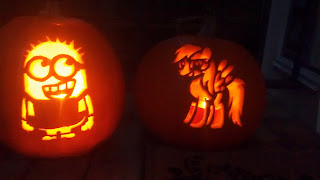 We watched the traditional Nightmare before Christmas movie along with The Great Pumpkin, and Hocus Pocus. After the trick or treaters died down we went over to some friends and watched Paranorman while eating tons of sugary sweet things. 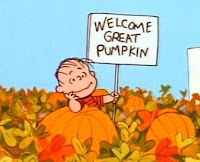 There were not that many trick or treaters in the complex, and unfortunately, not as many people handing out candy this year as there was the previous year. That all adds up to a pretty quiet neighborhood. Everytime there was a trick or treater we would scramble to the door - we weren't always ready - they were few and far between. We saw a Slenderman costume and an awesome Pinata costume though!

All in all it was an excellent Halloween! Now we just have to om nom nom all this leftover candy!
Posted by Vorgus at 7:48 PM