A sort of long time ago I had an idea for a game. The game featured super cool customizable tanks! Superbia's Tank it was called. I was in love with the idea and during a class in my Game Art & Design program I got the chance to make a game design document based on the idea. Now, years later, I'm trying to take what would have been a video game and am making it into a card game :)

I'd like to make it simple yet complex enough to offer various strategies for winning. Basically, players will make their tank out of 3 cards, discretely issue their tanks orders like shooting and moving, and try to be the last tank commander standing.


It will be important to draw cards, but also shoot at your enemies and make sure they are not getting ahead. With enough cards you could play larger groups of people, but I'm creating a prototype for up to 4 players. There are Cannon cards, Frame cards, Tread cards, as well as cards that upgrade the various pieces and One-Off cards that let you dodge or put a banana peel on the battlefield. Yes. Despite the Superbian military's elite tank building department they can still be susceptible to a mere banana peel (except for the Hover treads!). 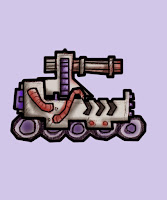 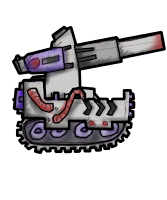 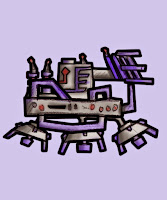