Been a while since I posted pictures from a Warhammer battle (to be honest I've just forgotten to bring my camera to any other games). So I finally remebered to bring that camera thingamabob and snapped these pics.

It's a 3000 point game, me and a friend using Chaos and Vampire Count versus my friend's High Elves. As you can see there is a rather large unit on the other side of the table... that would be a 80 squad of High Elf Spearmen! Biggest unit I've ever seen. It's hard to believe that's the whole 3000 point army over there :P but it is. 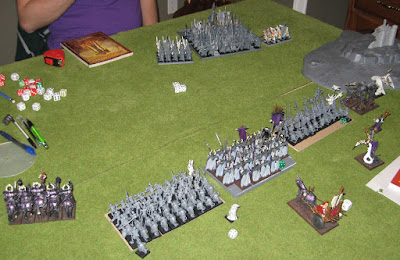 So later on the Spearmen finally engaged my Grave Guard and were unable to punch through thanks to some Helm of Commandment Magic and the units toughness and armor. Some Chaos chewed through some High Elf Swordmasters and swung in to engage the flank, and some Trolls came in on the other flank... Things don't look good for the High Elves, but it gets worse! 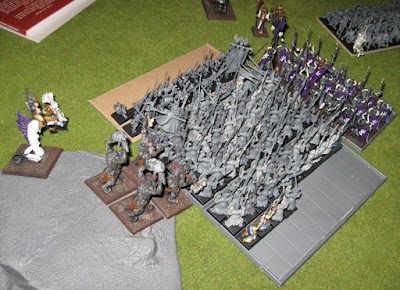 My Vampire Lord uses "The Withering" reducing the High Elf Spearmen's toughness to a measly "1" and the Chaos Caster manages to get off "Static seizures" causing a toughness test on the High Elves... needless to say a toughness test where "1" is your only save is... catastrophic! About 60 died, brutal! 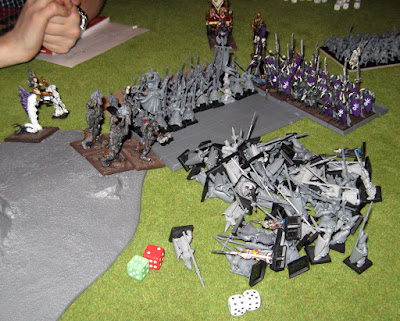 Yeah, but then a Ton of dragons came and ATE all your guys. Didn't publish that part now did you? Hmm? lol